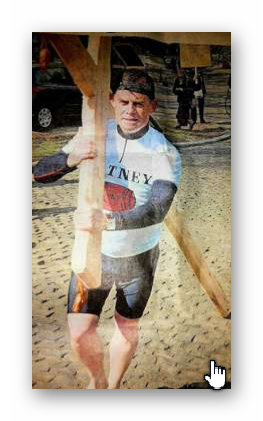 In early April (2017) I was in Belgium. One morning I was flicking through one of their national papers, which is in Dutch (Flemish) but illustrated in English, and was surprised to find three pictures of a cyclist sporting a Watney's Red Barrel T-shirt. It was quite a nice one. White with black trim around the neck and sleeve ends with a short zip on the front. Watney in large black capitals with beneath the symbolic red iconic barrel which we so miss. What made the photograph so poignant was that he was in shorts, bare footed and carrying a large wooden cross, like in the bible.
My heart cried out for him. For his dedication to a lost cause. Even more heart breaking was that he was carrying this cross up a steep narrow cobbled lane. Which was doubly sad because in one of the pictures, beyond him, I can clearly see someone has beat him to it and already planted a cross on the hilltop. What’s more there’s someone crucified on it. Probably the Watney head brewer.
But then I translated the quite long accompanying article. It turns out that The Red Barrel T-shirt is a Red Herring. The steep cobbled lane Red Barrel Man is ascending is one of the famous cobbled climbs in the brutal 170 mile Flemish one day cycle race, De Ronde Van Vlaanderen.  The 2017 race was the 101st edition. It was first held in 1913 and due to the First World War the second edition was held in 1919 and has been run annually since then. This cobbled lane is called The Geraardsbergen. Famously known as “De Muur” (The Wall). A vicious, energy sapping climb, and due to its steepness it was always a mecca for fans to see the cyclists at their most tortured as they ride up relatively slowly.
Red Barrel Man was in fact mourning the exclusion of this hill from the 2012 edition of The Ronde, the year the first two pictures were published. However, there is a happy ending, for those of you who haven’t yet given up. The race organisers brought the hill back into the course for this year’s edition and so there is a third picture of Red Barrel Man walking up the hill before this year’s race. This time he’s wearing long trousers and shoes BUT exactly the SAME T-shirt !  However, this time he’s not carrying a cross. But perhaps he’s gone to fetch it back down?
Strangely, I could find no mention of why he’s been wearing the same T-shirt for five years. No mention at all of Watney’s Red Barrel. Some newspaper editors have no sense of history.
Pete Smith 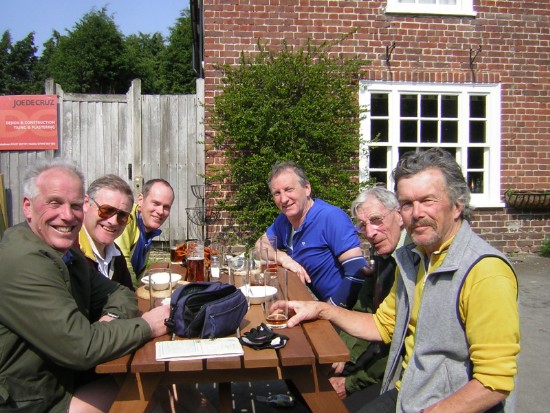